We Do Data Right.

We use real world evidence to help you on your journey

A History Grounded in Epidemiology

In 2011, Dr. Femida Gwadry-Sridhar founded Pulse Infoframe to fill a research gap that neglected millions: an inability to collect standardized, useful real world evidence in rare disease, cancer, and chronic condition populations. To increase the usefulness of this data, researchers needed to combine it with more common forms of data, such as medical reports. Collecting such sensitive data also meant developing a platform that would follow stringent regulatory guidelines, that would make it useful to researchers and advocates around the world.

10-year history of registries and observational studies in over 25 rare diseases, cancers, and chronic diseases to help thousands navigate their journey toward finding effective treatments and critical answers for their disease or condition.

Learn More About Our Partners

Science drives the data. We think long-term to maximize the use of real-world data to accelerate the development of new treatments by considering the scientific research questions our partners want to answer both now and in the future. Guided process led by a dedicated project leader with support from our , clinical team, and data science team as needed to help you determine what data to collect, how, and when.

We Do Data Right:

Our Platform approach is designed to support the collection of real-world data that is structured to ensure research methods can be systematically applied to produce meaningfully comparable and reproducible evidence.

This approach enables you to address your research questions in two ways:

Our team of clinical and data science experts will work with you to home in on the data types and variables you need to address your study objectives and research questions and minimize the collection of unnecessary data that will only generate noise. Once we understand your data requirements, our platform supports the collection of data sources such as Existing registry data, EHR, claims, PROs, genomics, and more.

Our Platform enables the structured collection of data and can map it to Observational Medical Outcomes Partnership (OMOP), Clinical Data Interchange Standards Consortium (CDISC), and others to meet downstream pharma regulatory requirements. We ensure the data captured allows for consented data-sharing permissioning across stakeholders and meets regulatory standards required by the FDA and EMA.

Our Platform is GDPR and HIPAA-compliant. 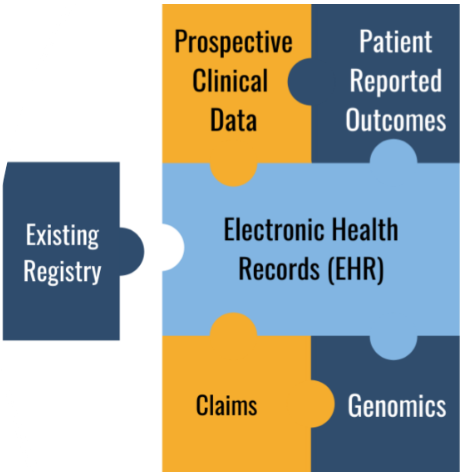 The Next Step on Your Journey

We’ve developed a platform to help your community collect and share its data and lived experiences. Real world evidence, medical records, insurance payments, trials…you can combine it all into a powerful resource to accelerate your research. To learn more about how we can help you along your journey, contact us.
Contact Us
2022 Pulse Infoframe Inc.
We use cookies on our website to give you the most relevant experience by remembering your preferences and repeat visits. By clicking “Accept”, you consent to the use of ALL the cookies. Read More
Cookie settingsACCEPT
Manage consent